I had always wanted a model of 3813 in the Cardiff outshopped streamlined green. It was different to all the other blunt nosed 38's, and it had a unique charm about it.

The AMR model is pretty good dimensionally, and overall sits about right for a 38cl. It's far better than the Lima offering that was provided in the late 1970's and hopefully will form a staple in a lot of modellers fleets, due to how easy the engine can be detailed and updated.

I took to the engine with a chisel blade knife, bringing the oversize rivet heads down to a more acceptable size. They were easily fixed with something as simple as that. I then proceeded to start sanding down the boiler on the locomotive to remove the oversized boiler bands, valance and panels. It was a fairly straight forward thing to do, hit with 400g sand paper and then 800 to smooth it off. Just be gentle if you wish to do this. 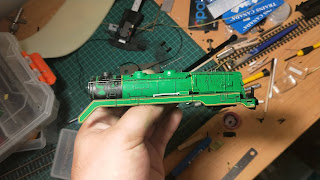 The engine then went for a bath in some LA's totally awesome. I have a 2L container full of it, I find it to be a really good way of removing lining and paint. The LA's doesn't attack plastic, I have not had an issue with it as yet. It's not cheap to get a hold of either which is the problem ($15 AUD a 1L bottle) but it's invaluable in my modelling process. All the lining and transfers were safely removed. 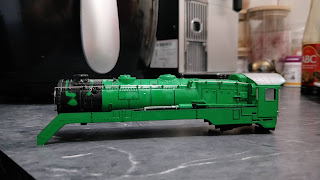 I had previously altered the valve gear as the combination link as delivered is set for the engine to run in reverse. Not much of a point, an express engine isn't thought of doing that when you stare at it. The original rivet securing the combination link was removed with side cutters, soldered the original hole shut and drilled a 0.8mm hole in the bottom of the link, inserted some 0.8mm brass rod into the assembly and it looks far far better.

A new turbo generator (Mansfield 60cl), headlight and whistle (Kerroby 38cl casting), and a smokebox door wheel (Casula Hobbies) along with a proper smokebox door handle, grab irons on the sand box with some filling done on a mould line on the body completed the alterations to the body. 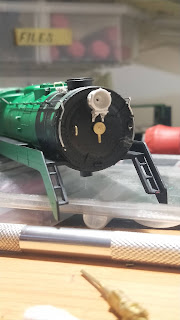 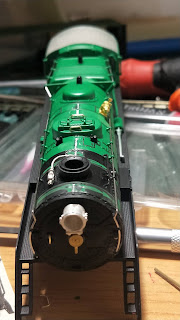 I have had a long standing feud with decals, and this shows. I had purchased an easi-liner pen some time ago for lining and it became a valuable tool in this paint job. The body was sprayed into an olive green off the shelf from Model Colour, and a custom colour for lining was mixed from a few Tamiya acrylics. Next time I go to do this, I won't use tamiya acrylics to line as they are a solvent based paint despite contrary belief.

Lining was applied one side at a time, and there were some issues. I touched them up as best I could, clear coated the model and added the decals I had to add.

Once cleared, cab side buffer beam and tender numbers were applied from various decal/etches to finish the model. I ran out of cab numbers so I only will show one side of the engine at this stage.

I am awaiting a Loksound V5 and a Ctrl P tender kit, to replace the ARM underframe with pivoting bogies, which should hopefully show up today.

Enjoy these images, and hopefully it'll encourage a resurgence into my modelling which has been very far and few between over the last few months. A few interesting projects on the way this year I hope, so we shall see what happens! 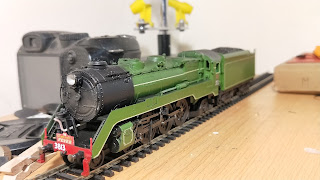 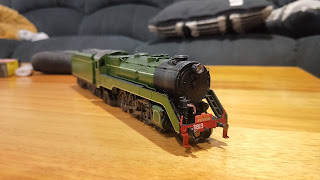 I also pulled out a few of my other 38's, including a Mansfield and a PSM just to compare the pair. I was extremely surprised at how well the modified ARM stood up to both of the other variations. so I'll include these images. 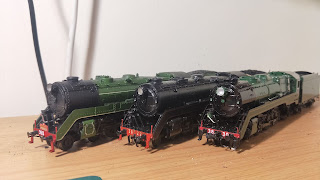 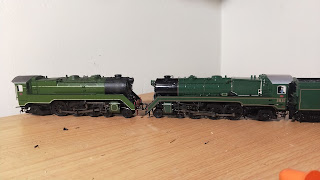 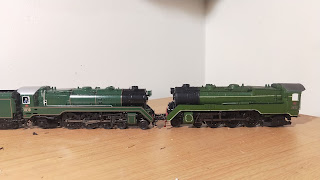 Also included is a 38 I'm doing for a gentleman in the united states. Hoping it will be finished soon. 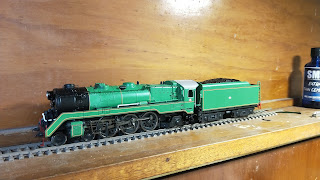 Hope everyone is well.